Hasina Kharbhih’s organization Impulse NGO Network (INGON) has revolutionized the fight against human trafficking through its globally-recognized Impulse Model that strengthens prevention mechanisms and facilitates a streamlined process of reporting and reintegration of survivors. 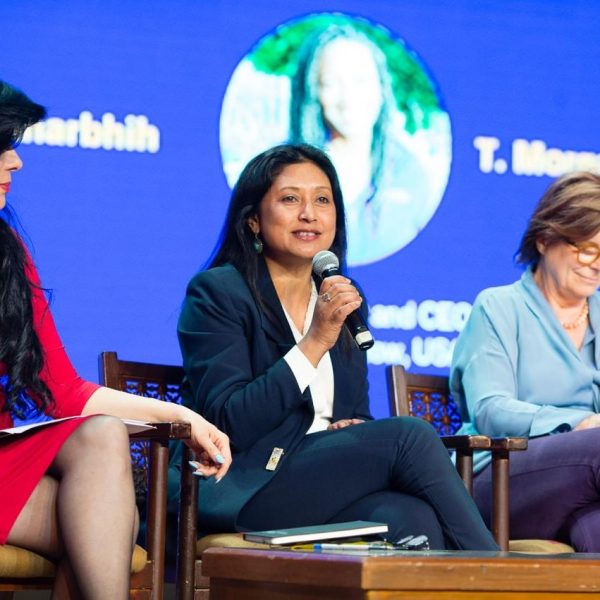 Although official data are lacking, human trafficking in the form of sexual exploitation and forced labor affects an estimated 20 million people in India. Particularly in India’s northeastern state human trafficking networks are deeply embedded and difficult to interrupt, much less stop. Traffickers take advantage of weak legal enforcement, unregulated internal migration, and dire economic conditions. Because India boasts the second-largest population in the world with 1.4 billion people, disorganized responses are not even putting a dent in a global industry that reaps $150 billion a year.

Thirty-two years ago, Hasina Kharbhih founded Impulse NGO Network (INGON) in Shillong, Meghalaya, India to tackle the pervasive issue of human trafficking. But before Hasina created a globally-recognized model and received dozens of awards, she was a passionate high school activist and human rights defender. After meeting like-minded peers in a program called Leadership Training Service (LTS), she founded INGON to continue their work upon graduation.

This cadre of young people led by Hasina was first alerted to the issue of human trafficking by chance during one of their first projects, which aimed to increase market access to women artisans in a village adjacent to that of Hasina’s grandmother in the East Khasi Hills of Meghalaya state. Access to natural resources by craftspeople was cut off when India’s Supreme Court instituted a ban on logging in 1996, so livelihood options were also slashed, forcing many to migrate to urban centers for more stable incomes.

During this migration, there was a sharp increase in reports of missing children. While trying to understand the cause behind the increase, Hasina was invited to a conference of NGOs in South Asia to address the issues of human trafficking and child exploitation. After the conference, Hasina sent emails to her new contacts requesting that they notify her if they found missing children from her region. Within two months there was a match—two girls from Meghalaya were rescued from Mumbai’s Red-Light district by an organization called Prerana.

In their response to these two cases, Hasina and her team began to lay the foundation for what would eventually become the Impulse Model, an innovative approach to human trafficking that, decades later, serves as the backbone of the Impulse NGO Network (INGON). 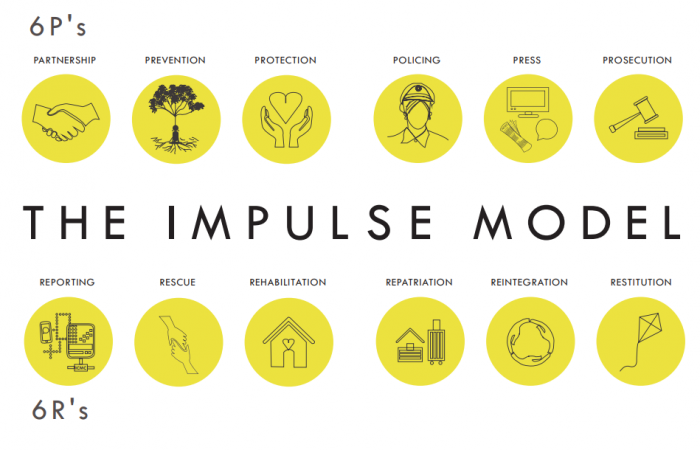 The Impulse Model has six P’s and six R’s that comprise its holistic approach. Graphic by INGON.

At the heart of their strategy, INGON is transforming how the system—from police all to way to the public—addresses the issue of human trafficking. Instead of working in fractured silos, INGON coordinates the efforts of law enforcement, legislators, NGOs, and civil society for a unified response that amplifies their impact.

For thirty years, Hasina has fought human trafficking by institutionalizing comprehensive response measures, streamlining reporting, and providing dignified livelihoods to communities targeted by trafficking schemes. Since its inception, INGON has intervened in over 73,000 cases of human trafficking and improved the lives of exploited men, women, and children across North East India, Nepal, Bangladesh, and Myanmar.

Hasina remembers sitting in a cramped police station in 1989 to demand someone take action to protect a human trafficking survivor from her village. Instead of assisting her, she recalled an officer lecturing her: “Young lady, you should not be spending your time in a police station. If a woman wants to leave the home and be a prostitute, you should not be so affected.”

Hasina’s concerns were not only dismissed but often belittled as authority figures insisted that human trafficking cases resulted from conscious choices made by individuals. But Hasina’s research and relationships with survivors indicated otherwise. Hasina maintained that the dominant attitude held by police was not only morally wrong but illegal—India’s Criminal Law stipulated there be “comprehensive measures to counter the menace of human trafficking.”

First, INGON created a curriculum and training manual based on resources from the U.S. State Department for Indian law enforcement and police training schools to better identify and protect victims of human trafficking. Training is now mandatory, standardized, and funded by the Ministry of Home Affairs. Alongside like-minded organizations, INGON also successfully lobbied the Ministry to set up Anti-Human Trafficking Units (AHTU) in every Indian state.

INGON has also achieved several court wins. For example, Hasina and her team fought the rampant problem of child labor and exploitation in the rat-hole coal mines in India’s Jaintia Hills district. This unlawful and dangerous form of mining, categorized by digging deep vertical shafts, has caused untold human and environmental disasters, including the exploitation of around 70,000 child laborers from Nepal and Bangladesh. Despite many attempted physical attacks and a ransacking of their office, INGON successfully filed a Public Interest Litigation (PIL) with the National Green Tribunal (NGT) in 2014 which instituted a blanket ban on rat–hole mining in the state of Meghalaya, a $650 million industry. However, mine owners are not giving up, and INGON continues to take legal action against the industry to protect both child laborers and the environment.

Shattering Silos to Scale Out

When INGON started receiving more cases from outside Meghalaya, they realized the need to scale out and train other states and even neighboring countries to implement the Impulse Model in their local context. As Hasina said, “Human trafficking has no boundaries and it was not possible to just be project-oriented, it has to be a collective response.”

Hasina and her team also noticed that slow and ineffective reporting and documentation processes prevented the identification and apprehension of human traffickers, especially across India’s porous borders which are hot spots for trafficking. INGON presented a two-fold solution: an internationally coordinated response complemented by a streamlined reporting platform.

In 2017, Hasina and her team crafted Standardized Operating Procedures for Human Trafficking between India and Myanmar, the first-of-its-kind joint effort between the governments and their law enforcement bodies. These procedures outline cross-border investigations, criminal prosecutions, rescue and repatriation, and compensation for victims. To stop crucial data from slipping through the cracks of bureaucracy, Hasina and her team created the online Impulse Case Management Centre (ICMC) that allows law enforcement from both countries to document cases and catalyze intervention, collaboration, and partnership with service providers.

Mr. Hem Kumar Jain, a Minister at the Embassy of India in Myanmar said, “With the software that INGON provided, the two sides can [respond] much faster than before. This also improves the understanding between the two police forces.”

The Impulse Model has been replicated in eight states in Northeast India and North Bengal and implemented by country partners in Nepal and Bangladesh. Under a partnership between the British High Commission and INGON, European and South Asian stakeholders convened in London in 2016 to scale the ICMC platform globally.

INGON does not only focus on the effects of human trafficking but also tackles the issues that drive it. After research and discussions with survivors, Hasina realized that a lack of economic opportunity in rural areas was the root cause of unsafe migration and that responding to cases and facilitating rehabilitation was not addressing the root of the issue. She said, “If we want to prevent trafficking in the long term, we must create economic opportunities for women so that they have a choice not to migrate unsafely–only then will see the larger chain be [interrupted]….a woman will not leave home if she has economic power.”

Hasina’s story came full circle when she launched Impulse Social Enterprises (ISE), a hybrid model of Impulse that provides women from high-emigration areas in Northeast India with sustainable livelihood opportunities. Based on her experience as a teen volunteer, she knew many villages in the northeast have long-standing artisanal traditions and skills but, due to a lack of market access or resources, artisans cannot secure a livelihood from crafts alone. ISE channels local talent into successful economic ventures such as weaving and textiles and trains artisans in contemporary design while providing professional marketing support and financial assistance. ISE has now provided economic alternatives to unsafe migration for over 30,000 woman artisans.

Hasina’s tireless dedication to stop human trafficking has been recognized through 21 awards, including the Mother Teresa Memorial Award in 2019 for “relentless and passionate work and ongoing efforts towards freeing the world from Modern Day Slavery practices.” Hasina and her team at INGON have successfully transformed the way human trafficking is addressed by implementing a comprehensive approach that tackles root drivers of trafficking, prevention, and response. With strengthened prevention mechanisms and a global reporting system, INGON is able to assist more survivors and prevent potential victims than ever before. 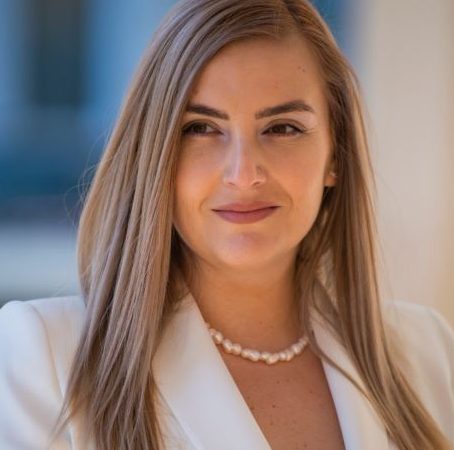 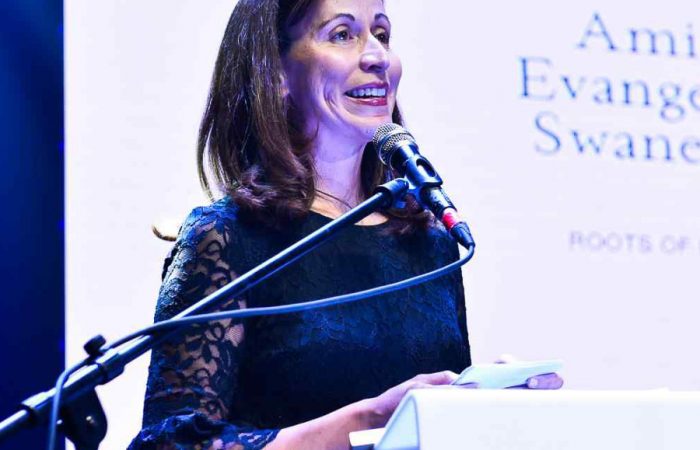