Alexandra Machado’s organization Girl MOVE is creating a new generation of female leaders in Mozambique by providing them with role models, or “models of references” and support systems they need to thrive.

During a decade-long stint as Nike’s Portugal country manager, Alexandra Machado sat at the head of the table–both literally and figuratively. However, Alexandra noticed that she was almost always the only woman present. Then, in 2014, Nike launched its ‘Girl Effect’ campaign, a global initiative that is improving and increasing opportunities for girls around the world. This campaign highlighted the challenges girls must overcome including child marriage, early pregnancy, and low school retention rates. These issues pose massive barriers for millions of girls, including in other Portuguese-speaking nations.

When Alexandra became a mother, she felt compelled to act. “I started developing a sense that motherhood is not only looking after and educating your children but also actively engaging in building the future you want for them,” Alexandra recalled.

Soon thereafter, she left the corporate world and embarked on a new chapter devoted to improving leadership opportunities for women and girls, starting in Portuguese-speaking countries. Alexandra learned that one of these countries, Mozambique, has particularly staggering statistics: as the fourth poorest country in the world, it also has the fifth-highest rate of child marriage. As a result, women are underrepresented in Mozambique’s social and economic spheres. After extensive research and a life-changing visit to the country, Alexandra realized changing societal expectations could unlock Mozambican girls’ potential to be changemakers.

So in 2013, Alexandra founded Girl MOVE, an organization that supports cadres of young women to achieve their academic, personal, and professional dreams. The impact of this intergenerational community of girls is profound; there is a demonstrated decrease in dropouts, child marriage, and early pregnancy among girls who participate.  One of the cores goals of this organization is to provide new female “models of reference,” which Alexandra defines as “more than a mentor – someone that can expand my horizons, who has walked and can show me a new path, that I can be and do more – a person who is an inspiration for me.”

From the Nike boardroom to countries around the world, women role models, or “models of reference” can be hard to find. But through Girl MOVE, Alexandra is raising the number of women making critical decisions and assuming leadership positions. Eight years later, Girl MOVE has created an intergenerational community network of over 5,000 Mozambican women and supported over 350 to get their Bachelor’s degrees and launch their careers.

Girl MOVE intervenes at a critical point in a Mozambican girl’s life: the age of 12. At this pivotal age, girls are often pressured to follow the path of their mother and grandmother where creating a family usually takes precedence over continuing school. To change a staggering 50 percent child marriage rate, Girl MOVE leverages new “models of reference” and alternative paths forward paved by women and girls who stayed in school and assumed leadership positions.

Girl MOVE fills this gap through bi-weekly ‘Sisterhood Circles’ that have created an intergenerational community of local women and directly connect young girls from the community to new models of reference. Each Sisterhood Circle includes one university graduate or “Girl MOVER” three university students and 30 to 40 primary school girls called “Mwarusis.” Girl MOVERS and University Students meet with their group of Mwarusis to discuss their dreams for the future, debrief the challenges they face, share personal stories, and work on the Mwarusis’ literacy skills. Annually, 40 Sisterhood Circles come together to inspire over 1,300 girls (aged 12 to 15) to continue their studies and become agents of change for their country. Most importantly, the Sisterhood Circles not only change the Mwarusis’ mindset but also engage their families along this journey. 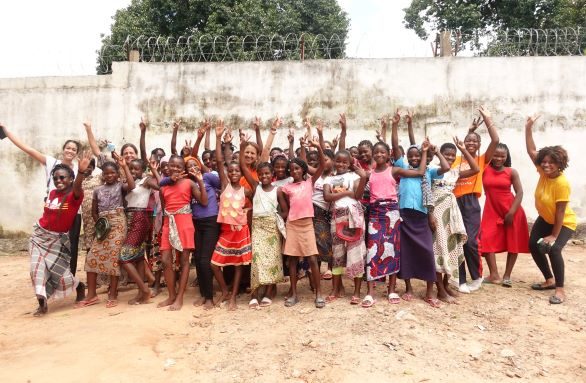 Alexandra is visiting a school, where she met and inspired part of the more than 1200 7th grade girls Girl MOVE works with and witnessed the impact of a sisterhood circle session led by a Girl MOVER (dressed in orange). Photo by Girl MOVE.

Girl MOVERS and university students meet with families one-on-one to showcase a different future for their daughter, leading by example to prove that when a girl stays in school, the possibilities are endless for what she can achieve.

Through a strong network of intergenerational support, Girl MOVE is expanding the limiting roles of women and girls in Mozambique. At Ashoka’s Women’s Initiative for Social Entrepreneurship (WISE), this form of impact is “scaling deep,” where dominant mindsets, behaviors, or social norms are changed.

Later in the academic journey, statistics continue to be impressive. Annually, 115 university students graduate. Women involved in Girl MOVE have an 85 percent graduation rate from university and 80 percent are employed within three months.

By leveraging the power of female bonds and offering the necessary support for girls at critical times in their lives, Girl MOVE continues to empower Mozambican women to write a new narrative for themselves and their country.

Girl MOVE Academy has worked to develop an innovative methodology for empowering girls that is easily replicable and can be applied in different communities throughout Mozambique and the larger Southern Africa region. Girl MOVE currently partners with five universities and ten primary schools whose Mwuarusis attend Sisterhood Circles as an after-school program. By training more partner institutions, whether universities or NGOs, to implement the Girl MOVE Academy programs, Girl MOVE is reaching an increasingly expanding network of girls.

In the digital sphere, Girl MOVE has developed an online training program during the COVID-19 pandemic to reach more Mozambican girls and inspire them to create Sisterhood Circles in their own communities. Around 5,000 girls gained access to an exceptional network of mentors and trainers, through challenges, videos, tools, and weekly inspiration. These so-called ‘shiners’ begin a journey of self-discovery where they develop their talents and skills to ensure more opportunities for their future–all through a user-friendly digital platform which is easily accessed through their phones or computers. 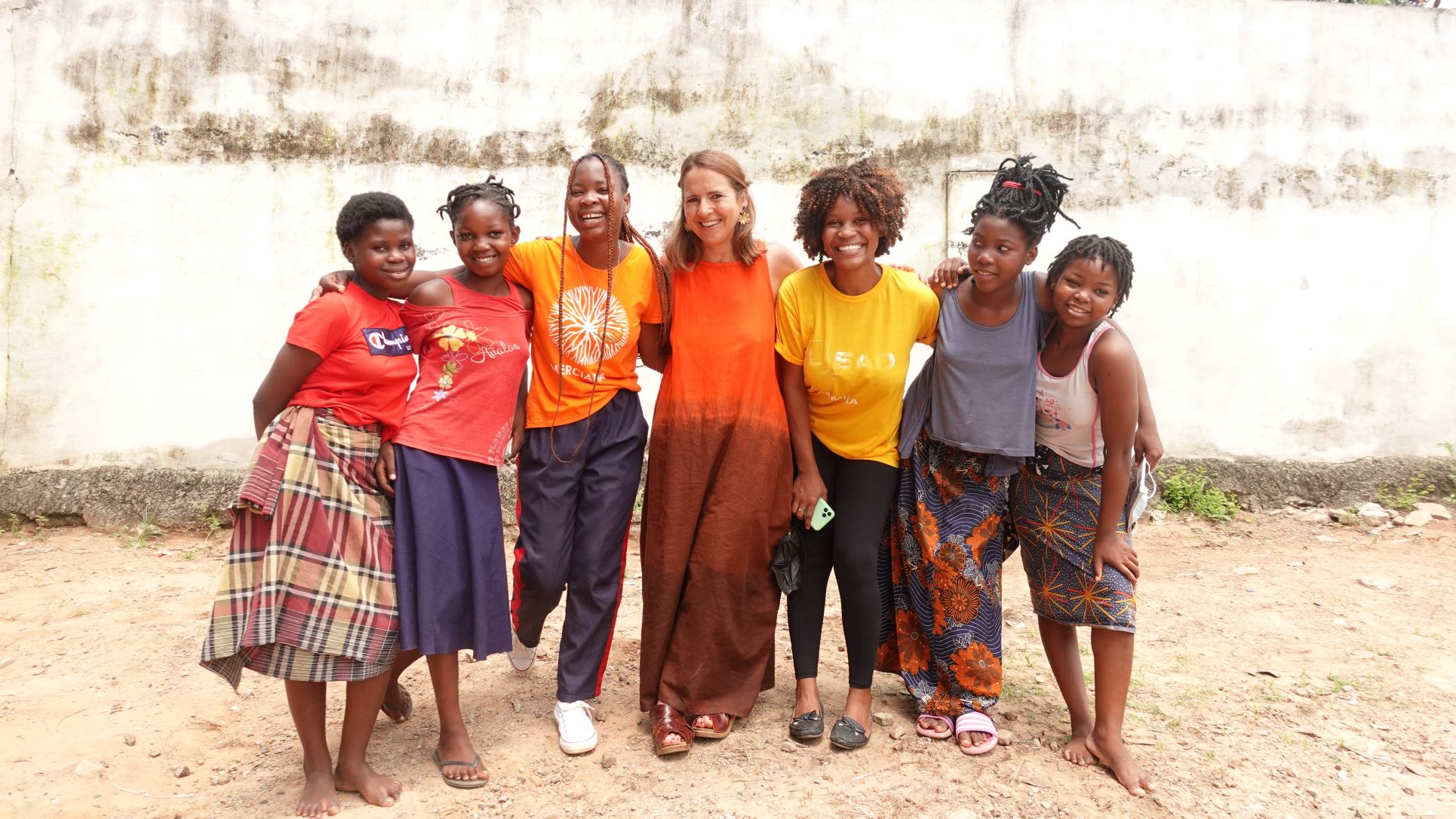 In Nampula, Mozambique, Alexandra is visiting one of Girl MOVE’s safe spaces in the community, meeting some of the Girls who are a part of an intergenerational Sisterhood circle. Pictured is a Girl MOVER (graduated woman), a university student, and girls from the 7th grade all connected by mentorship and reference models. Photo by Girl MOVE.

Additionally, Girl MOVE is currently developing ‘MOVHERS,’ a platform, program, and community all in one that connects today’s leaders with tomorrow’s female changemakers. The MOVHERS community is composed of leaders like António Guterres, Kristalina Georgieva, Cherrie Blair, and more than 100 others – including artists, activists, scientists, and politicians – that have already joined this global movement for good.

During a four-month digital program, female changemakers from all over the world will join thematic circles. The first theme addressed will be related to peace, climate action, and women-in-power and girls’ education. One of the main goals of this program is to amplify the local impact of these young changemakers by making it global and empowering them with the tools to uplift their leadership skills.

Alexandra Machado said, “MOVHERS will create global pathways for women of all backgrounds to change the world’s future. A future where female leadership influences global transformation at every level. From climate action to peace and human rights, through to all areas reflected in the United Nations Sustainable Development Goals.”

Previous PostHidden in Plain Sight
0Shares
Girls Empowerment
Manage Cookie Consent
To provide the best experiences, we use technologies like cookies to store and/or access device information. Consenting to these technologies will allow us to process data such as browsing behavior or unique IDs on this site. Not consenting or withdrawing consent, may adversely affect certain features and functions.
Manage options Manage services Manage vendors Read more about these purposes
View preferences
{title} {title} {title}